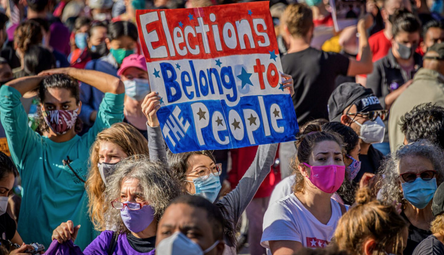 Experts say an extreme interpretation of the Constitution in this North Carolina redistricting case would make it even easier for state legislatures to suppress the vote, draw gerrymandered election districts, and subvert election results, among other concerns. At issue is a fringe legal ploy, the so-called “independent state legislature theory,” which has never been accepted by American courts.

On Wednesday, November 16th, at 8 pm, Becky Harper of Common Cause NC  – also a long-time member of UU Fellowship of Raleigh, NC – will discuss arguments by NC lawmakers advancing the theory, the case’s potential impact on our elections, and what Unitarian Universalists can do to fight back. Becky will be joined by an attorney from the Southern Coalition for Social Justice involved with the case.

Register here for this event.