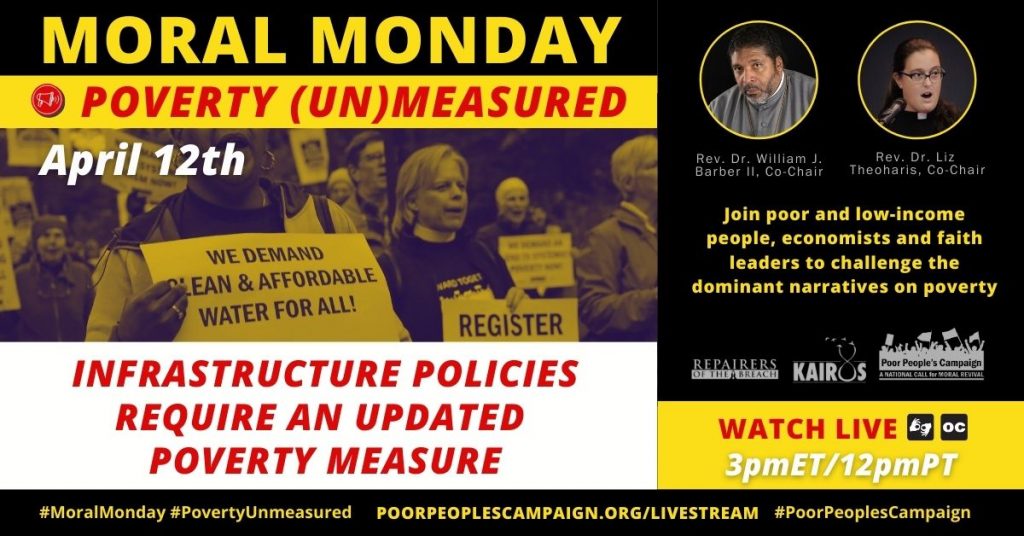 Join the Poor People’s Campaign for an online mass meeting Monday April 12th at 3pm ET / 12pm PT to hear from poor and low-income people, economists and faith leaders who will challenge the dominant narratives on poverty, a narrative that blames poor people for our situation, frames poverty as a racial issue to undermine multi-racial solidarity, and doesn’t recognize the full 140 million and growing who live in poverty or are one emergency away from poverty. Click here to RSVP.

As Congress debates a long overdue infrastructure bill, the Poor People’s Campaign will continue to fight for voting rights, labor rights, immigrant rights and living wages. On Monday, they will hear how narratives scapegoating poor people are translated into policies that further concentrate power and money in the hands of a few, deny adequate health care, housing, clean water and sanitation, good jobs and welfare programs, and feed attacks on our democratic participation.

This is the opportunity to rebuild this nation from the bottom up, lifting up communities that have faced deindustrialization, disinvestment and the devastation of the climate crisis. To do so, we must develop an accurate poverty measure to see clearly the need at hand, and build the political will to make poverty obsolete.

The Poor People’s Campaign and Repairers of the Breach have led peaceful protests and actions every Monday since 2013. As Rev. William Barber, NAACP North Carolina chair and leader of Moral Mondays, put it, “This is not about right or left; it’s about right or wrong.”