Moral Monday: The Bessemer 6000 and Building the Labor Movement from the South 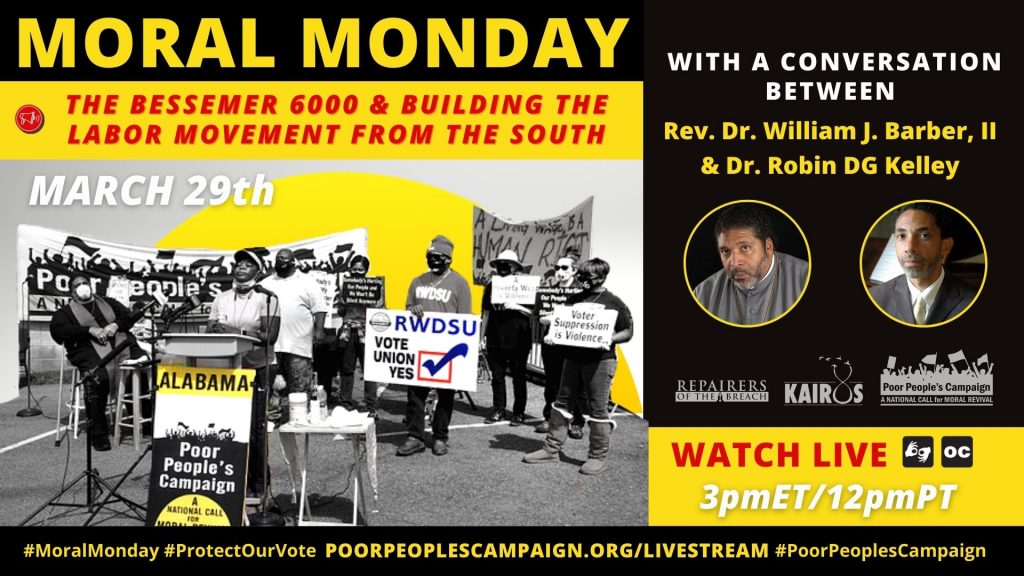 Join us this Moral Monday, March 29th, at 3 pm ET/12pm PT, for a recap of the Amazon warehouse workers struggle in Alabama and a conversation with Dr. Robin DG Kelley, one of the nation’s leading public intellectuals; a historian, professor, activist and author who has dedicated his life to studying and supporting freedom movements across the nation, and especially in the South. He will be joined by Rev. Dr. William J. Barber, II who will draw on the lessons of the multi-racial fusion movements in North Carolina and beyond.

Monday is also the beginning of Holy Week in the Christian tradition, where we remember Jesus turning over the tables of the money changers in the temple because they were exploiting the people. The moral outrage that characterized that first Moral Monday is carried forward in our work today.

The moral fusion organizing going on in Bessemer has lit a spark for the rest of the country and the world. Join us on Monday for this timely and critical conversation as we continue to heal the heart and soul of the nation. Click here for an RSVP.

The Poor People’s Campaign and Repairers of the Breach have led peaceful protests and actions every Monday since 2013. Join the next Moral Monday on March 22nd at 3 pm ET/12 pm PT as we continue to push Congress and the White House to enact the 14 Policy Priorities to Heal the Nation. As Rev. William Barber, NAACP North Carolina chair and leader of Moral Mondays, put it, “This is not about right or left; it’s about right or wrong.”