Moral Monday: Our Wage, Our Vote, Our Power 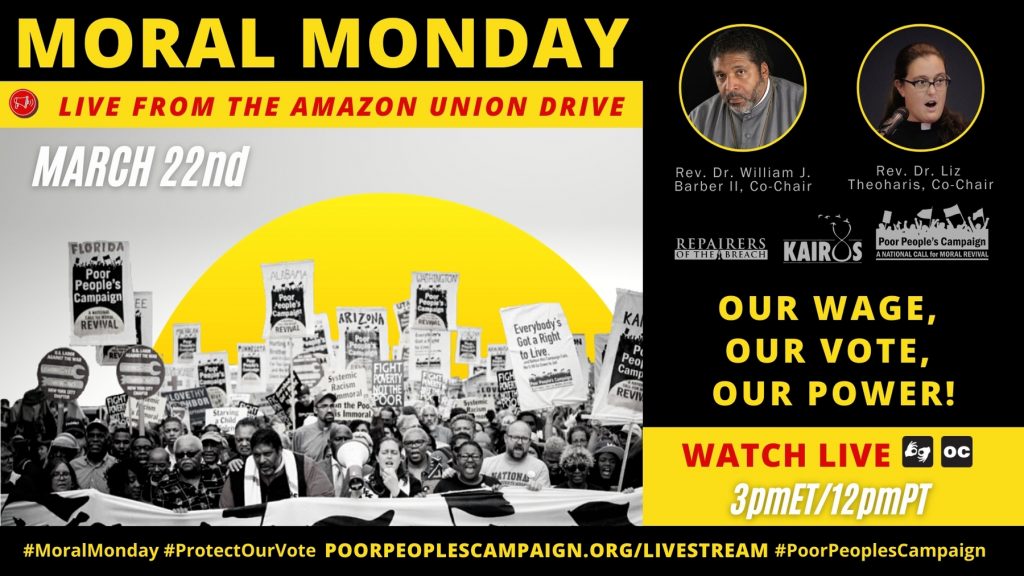 On March 22, 2021 Rev. Dr. William Barber will join with the Alabama Poor People’s Campaign and the Retail, Wholesale and Department Store Union campaign to uplift thousands of Amazon workers employed in warehouses in Alabama and across the nation.

The deadline is looming on a historic labor battle against corporate goliath Amazon in the warehouses of Bessemer, Alabama. This is the first viable attempt to form a union at the company in the United States, and nearly 6,000 warehouse workers — some 85% of them Black — must mail their ballots to the National Labor Relations Board by March 29, to certify the Retail, Wholesale and Department Store Union (RWDSU).

Unlike most Americans who have struggled during this pandemic, Jeff Bezos has seen his personal wealth skyrocket from $113 billion to $189 billion and Amazon saw a 200% rise in its profits. While they prospered, 20,000 Amazon employees contracted COVID-19. The company ended hazard pay while scheduling workers for 10+ hour shifts, monitoring their bathroom breaks and holding weekly employee meetings to discourage the union effort.

The Poor People’s Campaign and Repairers of the Breach have led peaceful protests and actions every Monday since 2013. Join the next Moral Monday on March 22nd at 3 pm ET/12 pm PT as we continue to push Congress and the White House to enact the 14 Policy Priorities to Heal the Nation. As Rev. William Barber, NAACP North Carolina chair and leader of Moral Mondays, put it, “This is not about right or left; it’s about right or wrong.”