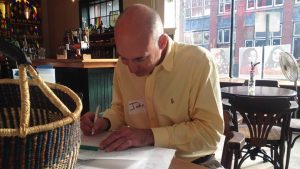 This informal weekly gathering offers local activists and concerned citizens a chance to get together and write their representatives in Congress about issues that matter to them. Drop in any time between 5:30 and 6:30. We’ll provide fact sheets, stamps, stationery, and postcards.   At this week’s Beer & Politics will the topic will be Healthcare Join us to write cards and letters to the US Senate and the NC General Assembly, and bring laptops and tablets and smart phones to call,  email, and deluge social media. Drop in any time Wednesday evening between 5:30 and 6:30. At The Block Off Biltmore. More here.

Though the Senate Trumpcare bill seems to be dead, the GOP is still talking about repeal and figure it out later.  They’re still working to dismantle the ACA, despite its strengths. McConnell is still planning to hold a procedural vote on the repeal bill “in the very near future,” even though he knows he lacks the votes to move it forward. Asked how he’ll justify failing to repeal Obamacare to voters, the Republican leader told reporters on Tuesday, “Well, we have a new Supreme Court justice.”  The fight continues. Join us!