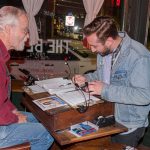 Kerry Stanley with a new arrival 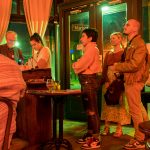 Checking in at November Watch Party 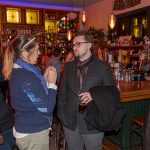 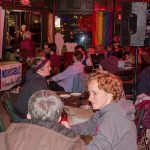 Chatting with friends before the debate 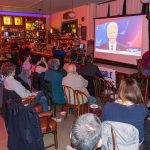 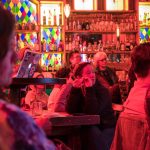 We had a great turnout at the Democratic Debate Watch Party we hosted with The Block Off Biltmore Wednesday evening, November 20, in downtown Asheville. This was the fifth of 12 scheduled Democratic Primary Debates  for  the 2019-2020 election season. It was still a crowded stage, with 10 primary candidates in this month’s debate: Joe Biden, Cory Booker, Pete Buttigieg, Tulsi Gabbard, Kamala Harris, Amy Klobuchar, Bernie Sanders, Tom Steyer, Elizabeth Warren, and Andrew Yang.

Mark your calendar for the next debate on Thursday, December 19! We’ll be at The Block Off Biltmore again to watch on the big screen.