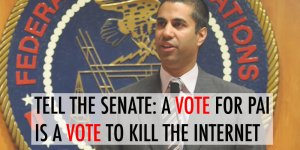 CALL your Senators now to protect our right to an open and equitable internet by voting NO on Pai’s reconfirmation to the FCC.

Trump’s FCC Chair Ajit Pai is hellbent on undoing net neutrality protections – even after a record 20 million public comments overwhelmingly told him to leave the open internet alone. But we have an opportunity to stop him in his tracks. The Senate has to vote to reconfirm Pai by the end of the year or he’s out. And the vote is imminent. Today? Tomorrow?

A vote for Pai is a vote for a corporate-controlled internet. (He’s clearly taken the side of big Internet Service Providers rather than the public… not surprising, since he’s a former Verizon lawyer.)

A vote for Pai is also a vote to roll back free speech, activism, and especially voices of communities of color. The National Hispanic Media Coalition notes: “For Latinos and other people of color, who have long been misrepresented or underrepresented by traditional media outlets, an open Internet is the primary destination for our communities to share our stories in our own words—without being blocked by powerful gatekeepers motivated by profit.”

Your Senators need to hear from you that they cannot reconfirm Ajit Pai to a new 5-year term as FCC Chair. We don’t have a lot of time. The vote will likely happen by early next week at the latest.

Beyond Net Neutrality, the FCC under Pai has an agenda that needs to be stopped.  Since Pai joined the Commission, he’s worked to undo policies designed to protect internet users, communities of color and poor people. While he’s supposed to protect the public interest, he’s continuously voted against it and sided with the deep-pocketed corporations that once employed him.

A vote for Pai is a vote to:

Not one senator should support that agenda.

Call and/or email your Senators now to demand that they vote NO on Pai’s reconfirmation to the FCC.