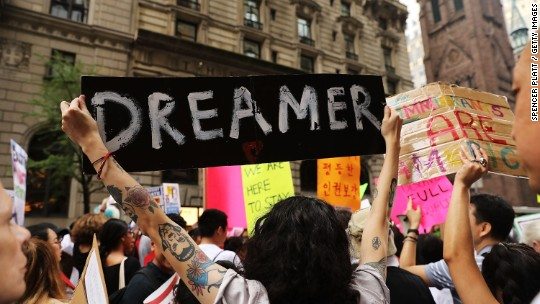 This Wednesday we will be partnering with Buncombe County Young Democrats to write to our representatives about the administrations’s plan to repeal DACA (Deferred Action for Childhood Arrivals), which allows undocumented immigrants who entered the country as minors to receive a renewable two-year period of deferred action from deportation and eligibility for a work permit.

As part of his wide ranging anti-immigrant policy, the president has signaled his intention to do away with this program, but some in his party are not going along with his plan, including our own Senator Tillis who “is reportedly assembling a ‘conservative’ DREAM Act offering amnesty to existing DACA recipients.”  Drop by THE BLOCK off broadway after work Wednesday any time between 5:30 and 7:30 to find out more and write a few postcards.

How did a little known professor, conservative talk radio host and stoker of the birther conspiracy theory become Trump’s pick to be the Department of Agriculture’s Chief Scientist?  Sam Clovis is not an agricultural scientist nor is he an agricultural economist nor does he appear qualified for a position that, by law, must be drawn from “among distinguished scientists with specialized training or significant experience in agricultural research, education and economics.” Mr. Clovis holds a B.S. in political science, an MBA and a PhD in public administration.

On climate change, he stated that he was “extremely skeptical … a lot of the science is junk science.” The USDA Chief Scientist’s job is to administer its policies to ensure “scientific integrity” in the department. His nomination is yet another sign that the Trump Administration rejects science-based policymaking.  Clovis is a weak-credentialed and unqualified choice to be the Department of Agriculture’s Chief Scientist.