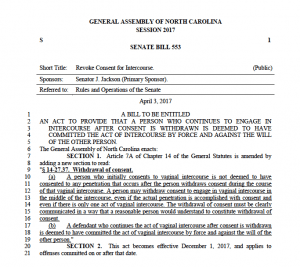 In 1977, the NC Supreme Court ruled that once intercourse has started, a woman may not revoke consent, stating, “If the actual penetration is accomplished with the woman’s consent, the accused is not guilty of rape, although he may be guilty of another crime because of his subsequent actions.”  The rule has remained ever since. This denies women who’ve been raped of access to justice. NC is the only state in the country with this law.

Senator Jeff Jackson has been trying to remedy this. But his “Revoke Consent for Intercourse” bill (NC Senate bill 553) is stuck in the Senate Rules Committee.  We will be writing and calling these senators who have the power to push Senate Bill 553 through the Committee to make it clear that this bill NEEDS to move forward.  (Above is the bill in its entirety.)

Here are their phone #s:

For a bit more about this horrendous law that must be overturned read this:

This North Carolina Law Is Straight Out of “The Handmaid’s Tale”: Women cannot legally rescind consent during sex.

The July 26th Beer & Politics  @ The Block will be devoted to the “Revoke Consent for Intercourse” bill (NC Senate bill 553).  Join us to write cards and letters to the NC General Assembly. Or write your own and call your representatives.  Just do something!

Posted in Archive, Beer and Politics
← Call as if your life depended on it! It does.Next Steps to Save Net Neutrality →