Indivisible AVL’s Deadline for Democracy Rally on July 2, 2021, focused on five crucial democracy reforms included in the For The People Act, and on why getting these measures passed into law is so urgent. We posted an update earlier with photos and highlights from the rally. In order to give a full picture of the event, we reprint here the speaker’s notes from Indivisible AVL Board member Brenda Murphree. 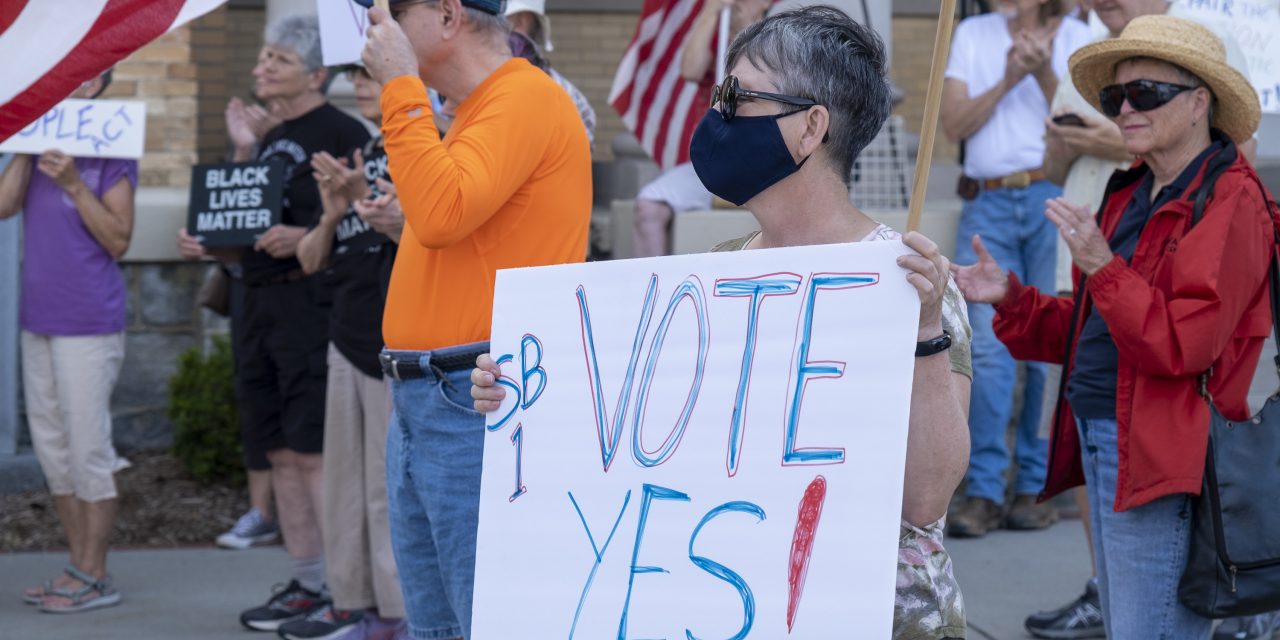 Why are we here today? Because we love our country. And we see our democracy under attack.

It’s clear that this bill’s voting right protections and democracy reforms are needed now more than ever.

This transformative legislation would:

Yet on Tuesday of last week, when this legislation was presented in the United States Senate, our North Carolina senators Thom Tillis and Richard Burr shot it down. Tillis and Burr opposed even opening debate on this bill.

Tillis even went so far as to call the legislation “partisan.”

We are here today to remind our senators that democracy is not a partisan issue.

Why are we calling this a Deadline For Democracy? Why is there a deadline? Because these attacks on our democracy are galloping along at a rapid pace – and we have two critical deadlines looming: Redistricting. And the 2022 elections.

Also, Congress goes on a month-long break in August and doesn’t return until September 10th. If the REDISTRICTING, VOTING RIGHTS and ELECTION REFORMS aren’t passed before Congress’s month-long August recess, it will be too late. NOW is the deadline for democracy.

And what does our democracy mean?

Let’s go back to our history. Back to our country’s founding principles – principles that stand for us today as guiding beacons of our democracy. 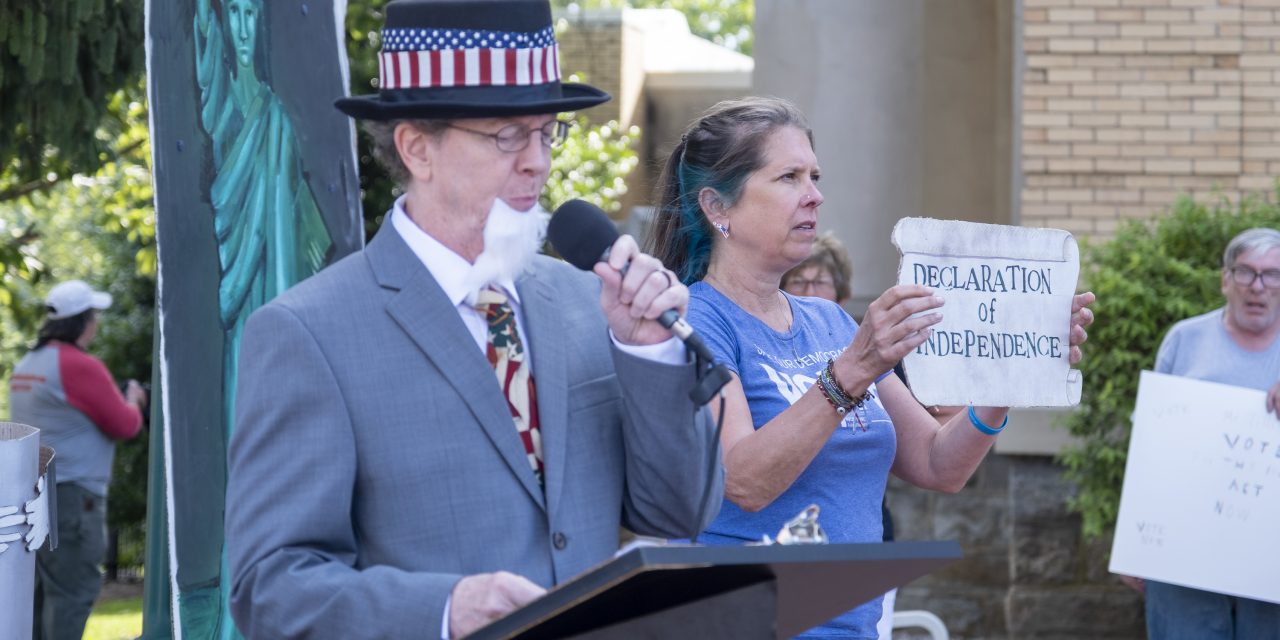 (Here, an actor read aloud from these key historical documents, and volunteers placed a “foundation stone” for each document at the base of the Stature of Liberty):

From the Declaration of Independence —“We hold these truths to be self-evident, that all men are created equal, that they are endowed by their creator with certain unalienable rights, that among these are life, liberty, and the pursuit of happiness. That to secure these rights, governments are instituted among men, deriving their just powers from the consent of the governed.”

From the Bill of Rights —“Congress shall make no law respecting an establishment of religion, or prohibiting the free exercise thereof, or abridging the freedom of speech or of the press, or the right of the people peaceably to assemble, and to petition the Government for a redress of grievances.”

From the Emancipation Proclamation — “By virtue of the power, and for the purpose aforesaid, I do order and declare that all persons held as slaves are, and henceforward shall be, free.”

The Gettysburg Address — “Four score and seven years ago our fathers brought forth on this continent, a new nation, conceived in Liberty, and dedicated to the proposition that all men are created equal. Now we are engaged in a great civil war, testing whether that nation, or any nation so conceived and so dedicated, can long endure. We are met on a great battle-field of that war. We have come to dedicate a portion of that field, as a final resting place for those who here gave their lives that that nation might live. It is altogether fitting and proper that we should do this. But, in a larger sense, we cannot dedicate — we cannot consecrate — we cannot hallow — this ground. The brave men, living and dead, who struggled here, have consecrated it, far above our poor power to add or detract. The world will little note, nor long remember what we say here, but it can never forget what they did here. It is for us the living, rather, to be dedicated here to the unfinished work which they who fought here have thus far so nobly advanced. It is rather for us to be here dedicated to the great task remaining before us — that from these honored dead we take increased devotion to that cause for which they gave the last full measure of devotion — that we here highly resolve that these dead shall not have died in vain — that this nation, under God, shall have a new birth of freedom — and that government of the people, by the people, for the people, shall not perish from the earth.”

These foundations we look back on from our country’s past should still guide us today. But they are in danger of being dismantled. We will never live up to the democratic ideals that have been affirmed throughout our history if we allow these current threats to prevail.

The best way to protect these foundational principles is to pass the FOR THE PEOPLE ACT. 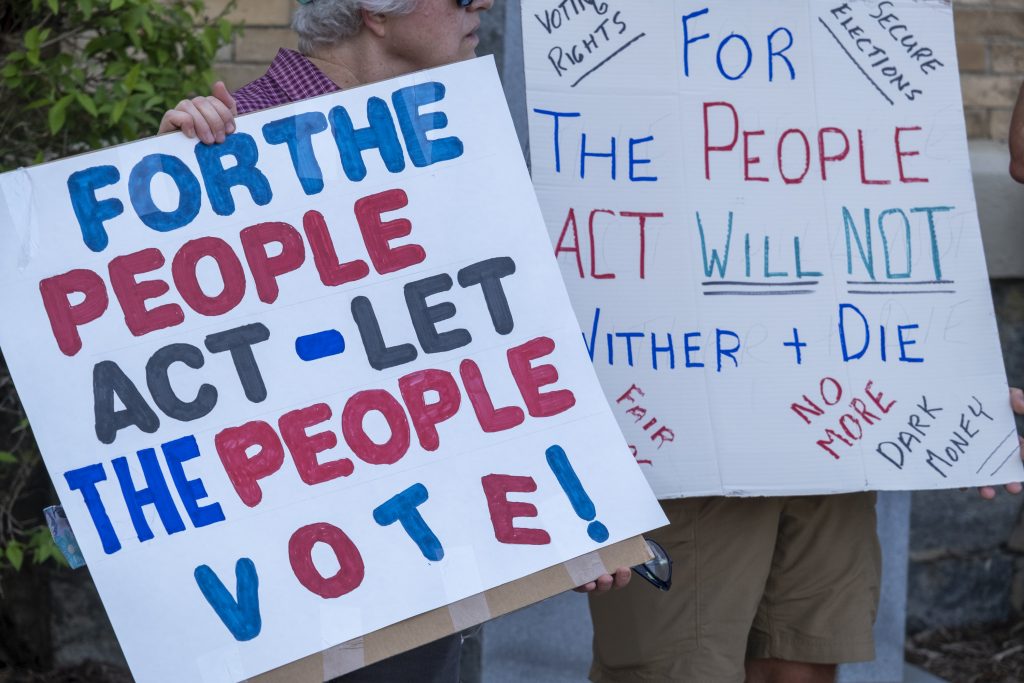 Let us all remember that, in a democracy, every citizen bears responsibility for ensuring that democracy’s success. So as we leave today, and go off to celebrate this Fourth of July weekend, let us also keep in mind the meaning of our foundational documents, as we commit to getting the crucial protections in the FOR THE PEOPLE ACT passed into law.

Posted in News and tagged For the People Act
← Deadline for Democracy Rally | Highlights“Which side are you on?” Sign the Open Letter to the Senate and White House →