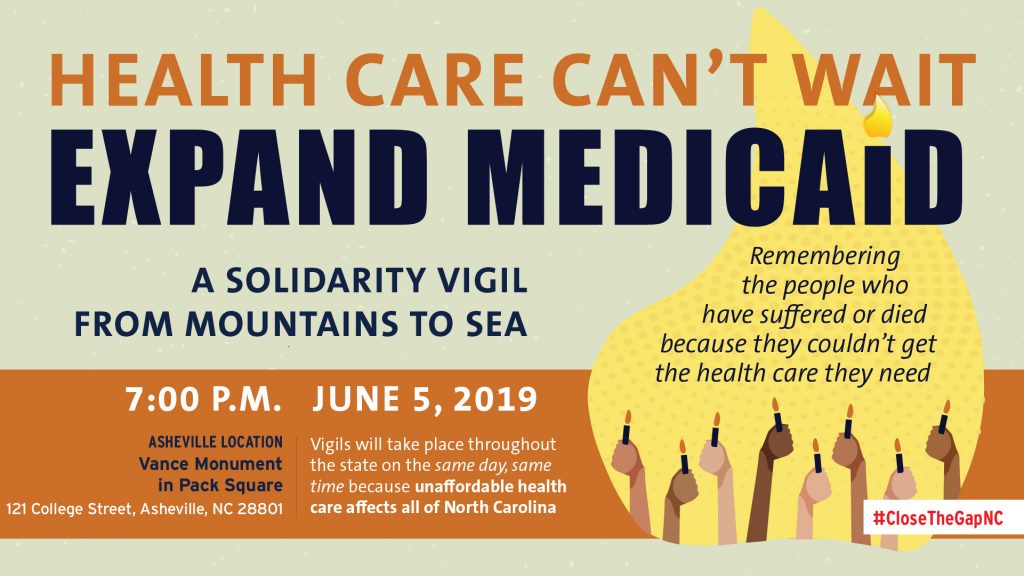 This statewide action — from the mountains all the way to the coastal cities and towns and cities in between — marks the coming together of a large, diverse group of North Carolinians who want our lawmakers to know that Health Care Can’t Wait.

RALEIGH (May 31, 2019) – On Wednesday, June 5, at 7:00 p.m, a Health Care Can’t Wait vigil will be held at the Vance Monument in Asheville’s Pack Square to stand in solidarity with over 20 other towns and cities. These simultaneous memorial vigils will honor and remember the people who have died and suffered in the Medicaid coverage gap.

North Carolina remains one of only 14 states that have not expanded Medicaid to provide lifesaving care to people in need. For too many people across this state, not having health coverage is a matter of life or death. These vigils will amplify the issue of closing the health coverage gap during this critical time in budget negotiations, since both the North Carolina House and Senate have left Medicaid expansion out of their budgets.

“Some of the highest numbers of uninsured North Carolinians who would be eligible for Medicaid under Medicaid expansion live in Western North Carolina,” said Brenda Murphree of Indivisible Asheville/WNC. “Most of the people in the gap are adults working in industries our economy depends on, such as construction, food service, and sales. Our state must close the gap.”

Faith leaders, local elected officials, health care providers, and people directly impacted by the Medicaid coverage gap will speak at the vigil in Asheville. The public and press are invited to attend.

To see a list of all the vigils taking place across the state, go to www.healthcarevigil.com.