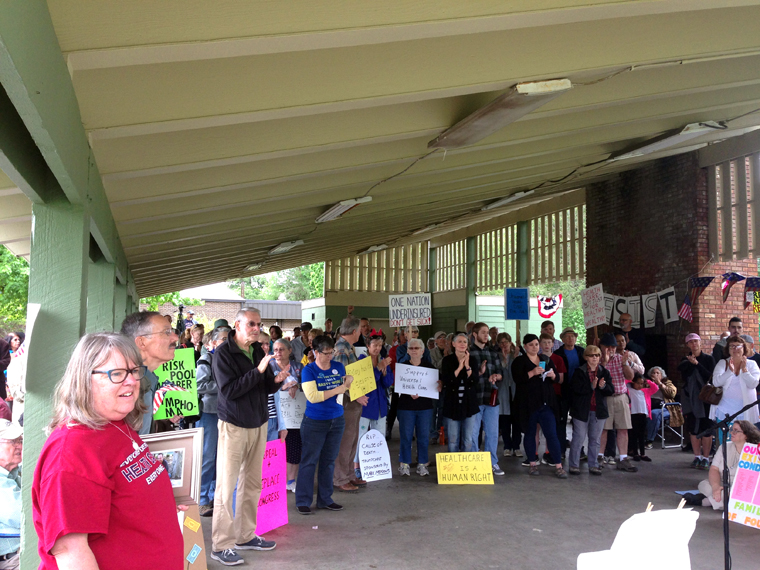 On May 13, 2017 over 150 people gathered in Jackson Park in Hendersonville for a Mark Meadows Town Hall. Hendersonville Indivisible organized the event along with other local activists. Although Congressman Meadows had been invited to meet with constituents and hear their concerns, he did not attend. So over a dozen speakers addressed the crowd to discuss Health Care, Immigration and the Environment.

John Moore, a local activists, began by saying, “Meadows has failed to meet his obligation to his constituents and hear our causes and our concerns.”

Leslie Boyd told the story of her son Mike who died of colon cancer at age 33 after being denied a colonoscopy because as a student, he didn’t have health insurance.

Dr. Brian Mitchell, a doctor in WNC for over 40 years, spoke of his patients with limited income, who went without health care because they couldn’t afford it. Dr. Mitchell: “Health care is not a commodity to be purchased, it is a basic human right to be guaranteed.”

Gail Kemp spoke for a DACA student afraid to speak in public for fear of deportation.  S/he didn’t learn until high school that s/he was undocumented. Gail told his/her story of working two jobs to make it through college, and now working and paying taxes but living in limbo as a result of the current administration’s stand on immigration.

Tate McQueen, an environmental survivor told the story of his neighbors living next to the contaminated CTS Super Fund site. They were shocked to learn that their high rate of cancer resulted from drinking contaminated well water for years without having been notified of test results showing high levels of carcinogens in their drinking water.

The rally came to an end when Norm Bossart invited us all to join arms and speak together: “When we take care of the least of us, we lift all of us up. We are one!”