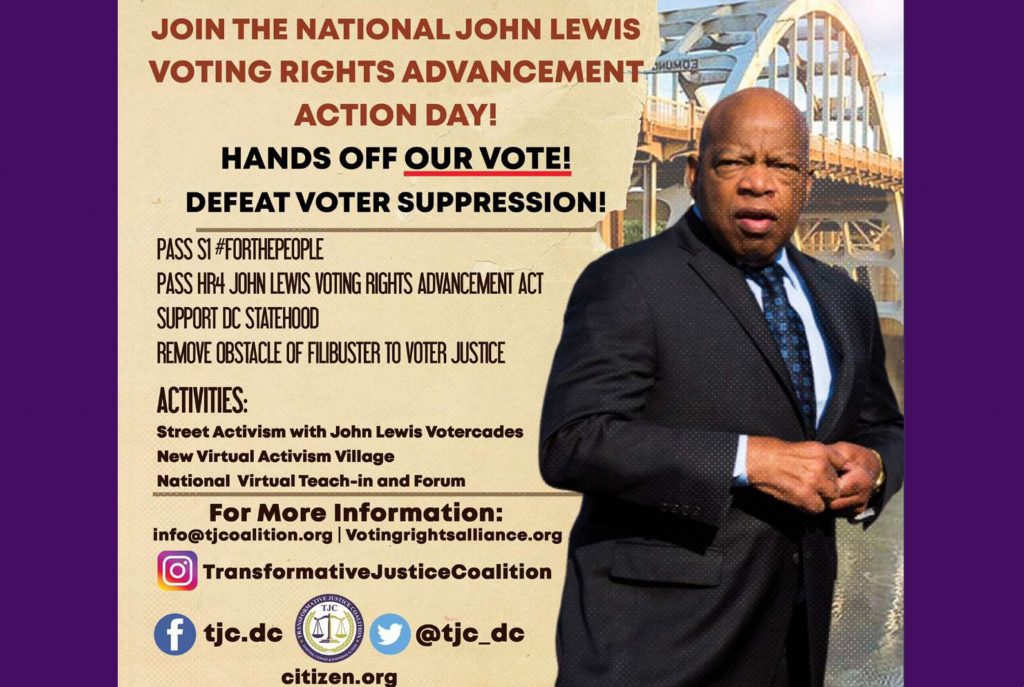 On May 8, 2021, a coalition of voting rights advocates and groups will take part in a John Lewis National Day of Action to generate public support for restoring the effectiveness of the Voting Rights Act and address one of the greatest obstacles to the passage of civil and voting rights – the filibuster!

HR1, the For the People Act, passed the House on March 3 and was introduced in the Senate as S1. It is now time for the Senate to act!

HR 4, the Voting Rights Advancement Act, originally passed the House in the last Congress, only to die in the Senate. The bill has now been renamed the John Lewis Voting Rights Advancement Act, in honor of the late civil rights icon and congressman, and is currently being revamped in committee in the House. Technically, the bill would restore the preclearance formula to the Voting Rights Act of 1965. Practically, it would strengthen voting rights for all Americans, by expanding and strengthening the government’s ability to respond to voting discrimination. It also fits together perfectly with the For the People Act, working together to reform our democracy and protect the right to vote.

HR51, the Washington D.C. Admission Act,  passed the House and was sent to the sent to the Senate on April 22.

The biggest obstacle to getting these critical democracy reform through the Senate is the Jim Crow-era blocking mechanism known as the filbuster. We must change or eliminate the filbuster in order the let the majority enact critical legislation.

The Voting Rights coalition has organized “Votercades” in over 100 cities, to call attention to these crucial democracy reforms. There are events scheduled in Charlotte and other cities in North Carolina, South Carolina, and Georgia, but currently none in WNC, so we are participating virtually!

Here’s how to show your support:

To learn more about the May 8 Day of Action and other voting rights actions, check out the info and resources from The Voting Rights Alliance.

To learn more about the John Lewis Voting Rights Advancement Act, check out the Brennan Center’s excellent (and thoroughly readable) article on “How to Restore and Strengthen the Voting Rights Act.”

The Brennan Center also has excellent info on the For the People Act (S1) and maintains a list of bills restricting voting rights.

For summarized background info, see our post on Talking Points on Passing the For the People Act, Ending the Filibuster, and Supporting D.C. Statehood.

Posted in Actions, News and tagged Voting rights
← Tell the USDA to Protect our Southern ForestsUrgent: Speak Out NOW Against Anti-Abortion HB 453 →