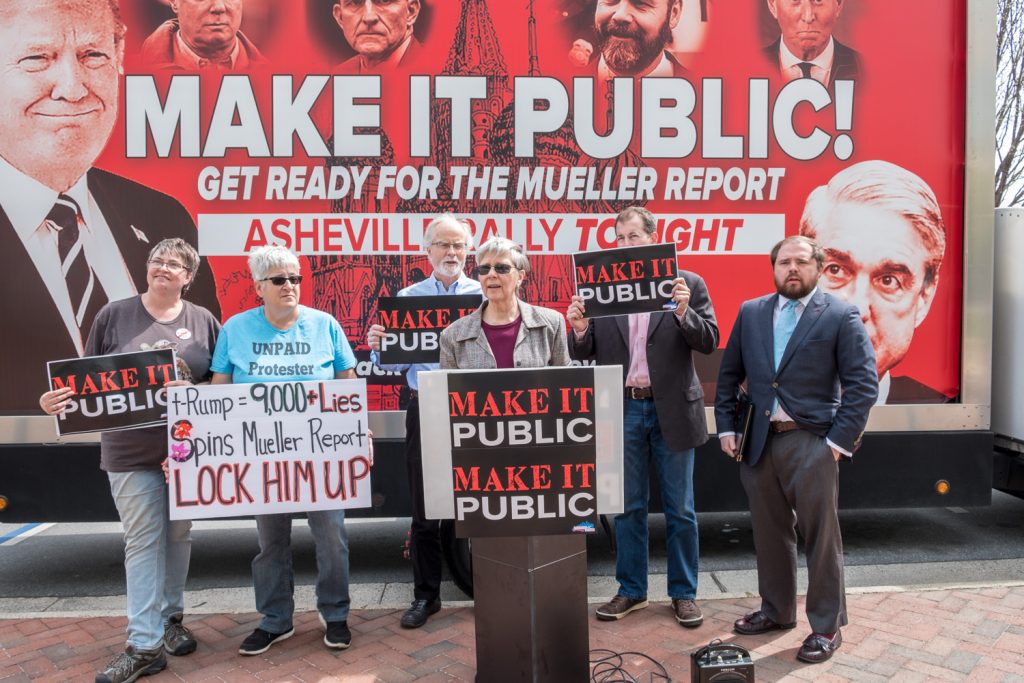 Indivisible AVL volunteers and supporters held a press conference for the local media on Thursday, April 4, at 3:00 pm, in support of the “Release The Report” National Day of Action and public rally held later that day. A local attorney presented brief remarks on the legal perspective on the importance of releasing the full Mueller Report, and the director of Progress NC Action presented an activist’s call to action, and Indivisible AVL steering committee member Brenda Murphree presented an ordinary citizen’s view.

I’d like to say up front that I’m speaking here as part of an independent and nonpartisan grassroots group. We are ordinary citizens working to educate ourselves and others in our community about important issues, and about what our representatives in Raleigh and Washington are doing about them. We work in partnership with other groups but we are totally independent and are not part of any party or any other group. In other words, we are just ordinary–and concerned–citizens.

So why are ordinary citizens be concerned about releasing the full Mueller Report? Why are we here today? I see three main reasons.

First, because the Russia Investigation was all about a foreign power’s interference in our election. And that is not only a serious issue, it’s a nonpartisan issue. It’s an issue that affects all of us.

The Russia Investigation was about a concerted campaign against the United States, a campaign to divide our electorate, undermine public trust in our system, and help one candidate win.

That candidate, now our president, allowed himself and his campaign to be pulled into that foreign power’s interference in our election, intentionally or not.  As a result, their actions became part of the investigation.

And as a result of that, the president and those loyal to him have been trying to make this a partisan issue.

But a foreign power’s attack on our democracy is not a partisan issue.

Our own Senator Thom Tillis even went so far as to claim: “Democrats in Congress now have a choice … to accept the findings of the Mueller report and move on …. or instead pander to their fringe base by rejecting the … report and launching politically-motivated and conspiracy-fueled investigations that will further divide our country.”

In the first place, how did he miss the fact that Democrats in Congress are not only not “rejecting” the Mueller Report but are in fact demanding to see it?

More importantly, what, in Senator Tillis’s mind, is the choice that Republicans must make? And why should it be any different than the choice the country must make? Why does he insist on making it a partisan issue?

Second reason why we’re here: We recognize that Congress must be free to do its job. In our democracy’s system of checks and balances, Congress has responsibility of oversight and investigation. And Congress cannot properly do its job if critical information is withheld.

The chairs of six House committees asked the Attorney General to submit the full report from Mueller’s Russia Investigation to Congress by April 2. That deadline has passed without a report.

The special counsel team on the Russia Investigation included 19 lawyers, about 40 F.B.I. agents and other personnel, for an investigation that lasted almost two years. Six people connected to the president have been charged, five have been convicted or pleaded guilty, and 28 others have also been charged, including 26 Russians. Dozens of others have been swept up in the investigation. And there are multiple ongoing investigations, with the US Attorney’s office in DC, the Southern District of NY, US Attorney’s office in Manhattan and Brooklyn, the NY Dept of Financial Services, the NY attorney general, the NY state tax department, the House Committee on Oversight and Reform, the House Financial Services Committee, and numerous others.

As the House Judiciary Chair stated, “The Constitution charges Congress with holding the president accountable for alleged official misconduct. That job requires us to evaluate the evidence for ourselves — not the attorney general’s summary, not a substantially redacted synopsis, but the full report and the underlying evidence.”

The third and perhaps most important reason we’re here is that we do need to move on. We need to move on to the real issues facing our country – healthcare, immigration, election reform, climate change, cyber security. And the only way to move forward  is to deal with where we are now.

The Mueller Report was about an investigation into an attack on our democracy.  There is nothing to prevent such an attack from happening again if Congress and the American people can’t see and deal with the results of the investigation. If Congress needs to withhold some elements from the public, that is Congress’s prerogative and Congress’s responsibility. But Congress cannot make that decision without having the full and complete report available to start with.

Under Department of Justice regulations, Attorney General Barr can publicly release as much of the document as he deems appropriate. If he judges that to be anything less than the full report, WE deem that he is preventing Congress from doing its job – and subverting the will of the American people.

So today we join with other concerned citizens in over 300 cities and towns across the country to call on Attorney General Barr to Release the Mueller Report.

The complete report. In full. Now.