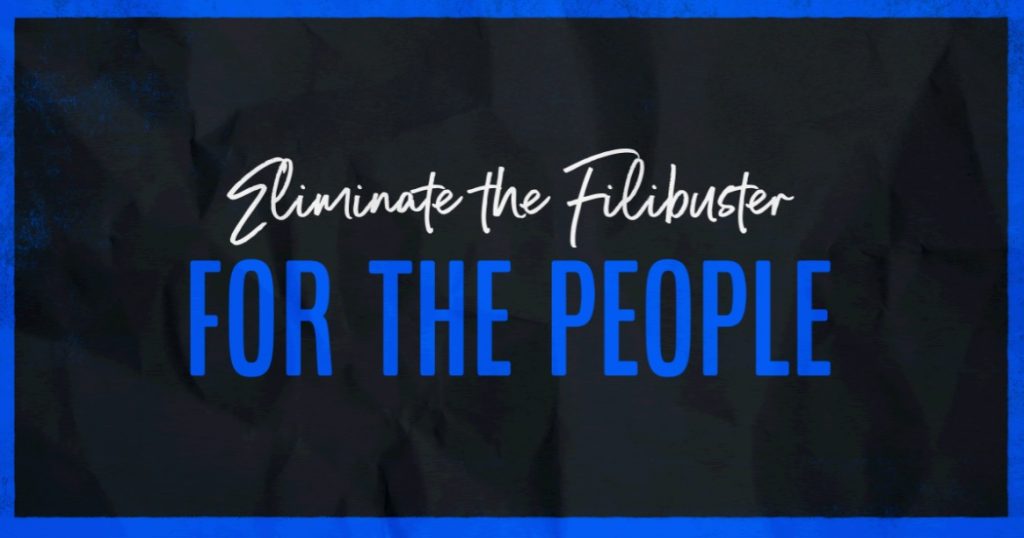 On Wednesday, March 3rd, the House passed H.R.1, the For the People Act, with every single Democrat signing on as co-sponsor. This major democracy reform package takes big money out of politics, restores and strengthens voting rights, ends partisan gerrymandering, and much much more. Now it heads to the Senate, where Republicans have pledged to vote against it, despite the fact that over two-thirds of Americans from across the political spectrum support it.

The way to get bold initiatives passed is to act boldly. Eliminating the Jim Crow-era filibuster will allow the Senate to pass this crucial legislation. But with the Democrats’ slim majority in the Senate, every Democrat will need to be on board. Senators Kyrsten Sinema (AZ) and Joe Manchin (WV) openly support maintaining the filibuster, although several other Democratic senators seem to be on the fence. And without eliminating the filibuster, the For The People Act will be impossible to pass.

Here’s why that matters.

Already this year Republicans in state legislatures have introduced 253 bills in 43 states to restrict voting access – even in solidly Republican states.

In Kyrsten Sinema’s home state of Arizona, they have introduced more voting restrictions than in any other state, even going so far as to allow the state legislature to appoint its own electors regardless of what the voters decide. As voting rights journalist Ari Berman points out in a recent interview in Slate,* at some point Sinema and the other filibuster holdouts will have no choice but to see this not only as an attack on democracy but also an attack on them, an attack on their ability to get reelected.

Until then, we will keep bringing this up.

Here’s what the bill includes:

The For the People Act is a big bold piece of legislation that will clean up and protect our democracy. Basically, the provisions can be grouped into three main categories:

The full text of the bill is available here.

The Democracy Reform Task Force, led by Rep. John Sarbanes, has also prepared a simple, section-by-section summary of the entire bill, which you can read or download here.

Here are three things you can do over the next few weeks to keep the issue front and center:

We don’t expect this to change overnight, but if we continue speaking out, if we keep speaking the truth about voter suppression and keep fighting for voting rights, we can keep the issue top-of-mind in public awareness. Sooner or later we will reach a tipping point. Sooner or later the holdouts in the Senate will be moved by political risks if not ethical convictions. But we won’t get there if we don’t keep making good trouble.

* For commentary on the current voter suppression frenzy and how the For the People Act and the John Lewis Voting Rights Act would counteract it, read or listen to the full interview with journalist Ari Berman here: https://slate.com/news-and-politics/2021/03/state-voter-suppression-bills-democrats-voting-rights-georgia.html For an explanation and history of the Senate filibuster, see this article from the Brooking Institution: https://www.brookings.edu/policy2020/votervital/what-is-the-senate-filibuster-and-what-would-it-take-to-eliminate-it/

Posted in Actions, Congress Watch and tagged Filibuster, For the People Act, Voting rights
← Sign Up To Speak Up For Clean EnergyTake Action on Gun Safety Legislation →