City Council is proposing a new hotel development policy that would allow hotel developers to bypass City Council and get approval to build in Asheville with no public comment and insufficient benefits or protections for the communities where they build. While the policy has some requirements of hotel developers that might result in some benefits to our communities, the requirements don’t do enough to actually advance racial equity, a stated priority of the City.

At City Council’s February 9th meeting, several Council members expressed these and other concerns with the proposed policy. We ask that Council members back up those concerns by voting NO on this new policy.

Council will vote on this item on February 23rd, and the proposal that is voted on could look different from the one we saw on February 9th.

It’s critical that Council hears from us before February 23rd.

There’s more information and even suggestions for what you can say when you reach out to City Council members on Racial Justice Coalition’s Call to Action page. 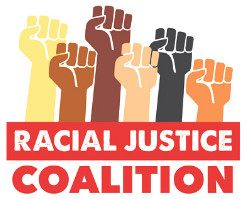 The following is a special update from All On The Line NC (Aug. 20, 2021): On Wednesday, August 18, the Joint House and Senate Redistricting Committee proposed this unacceptable public hearing schedule: Public hearings in just ten of 100 counties is a clear effort to eliminate voices. This is especially true for areas historically targeted…
Read More →