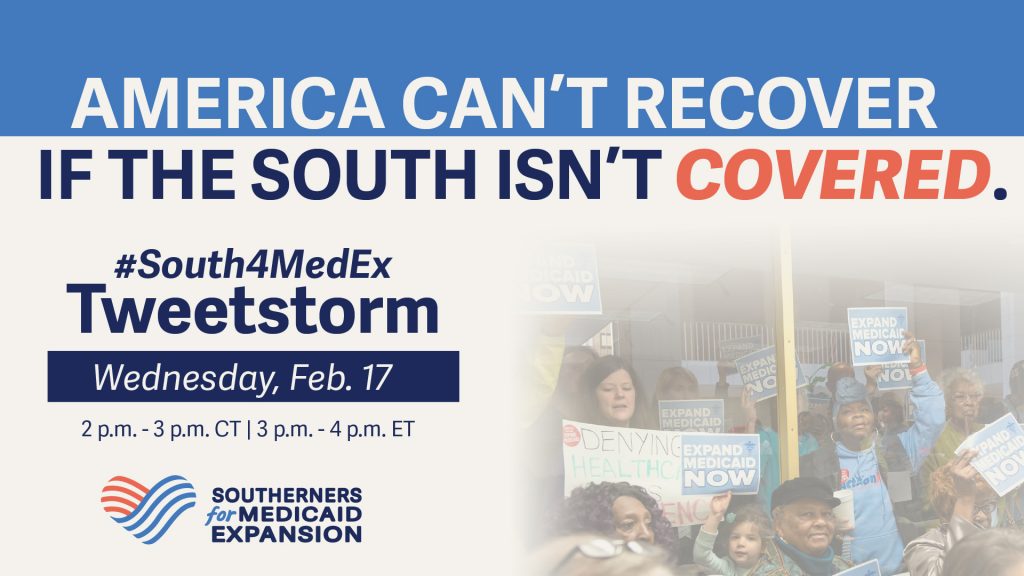 No more excuses! The COVID-19 crisis has shown us North Carolina needs to expand Medicaid now more than ever!

Of the 13 states that have refused free federal funds to expand Medicaid and close the coverage gap, eight are in the South: Alabama, Florida, Georgia, Mississippi, North Carolina, South Carolina, Tennessee, and Texas.

Uninsured rates in these states remain the highest in the nation. In North Carolina alone, an estimated 600,000 people fell through the coverage gap — not qualifying for traditional Medicaid but not earning enough to purchase health insurance on the ACA marketplace — BEFORE the pandemic.

Right now, some meaningful incentives for Southern states to expand Medicaid are currently being considered by the Biden administration and in both chambers of Congress. Expanding Medicaid is already a great deal for any state, with 90% of the costs of filling in the coverage gap already covered by federal funds. And this new legislation will bring in even more money to the holdout states, essentially giving NC surplus funds and helping us recover in a time of economic recession. (For more on the proposed legislation and what it would mean for our state, see this excellent summary from NC Policy Watch: “Just In from Washington: Relief Proposal Would Offer NC a New and Even Sweeter Deal On Medicaid Expansion.”)

Indivisible AVL has joined with seven other southern states in the Southerners For Medicaid Expansion Coalition to call on Congress and the Biden administration to pass this important legislation. Along with 167 other organizations in the coalition, we just sent this letter to the President and Congressional leaders.

Coalition partners across the South are organizing a Tweet Storm on February 17th to amplify the message that America can’t recover if the South isn’t covered.  So please join us! Use the hashtag #South4MedEx and help us make a splash.

The purpose of the Southerners 4 Med Ex February 17th day of action is to:

We too often see legislation from D.C. that does not adequately address the racial injustice & wealth inequalities that must be addressed to make progress in our region. Thank you Sen. @RevWarnock and @RepVeasey for fighting for our healthcare needs in the South.  #South4MedEx

The pandemic exposed long-standing systemic racism and economic disparities across the South—now that we can see it, we all must work to change it. We need policies that will make coverage and care more affordable. #South4MedEx

Southerners are more likely to be uninsured than any other region in the U.S. NC needs #MedicaidExpansion now! #South4MedEx